Presenting to an old blogging buddy 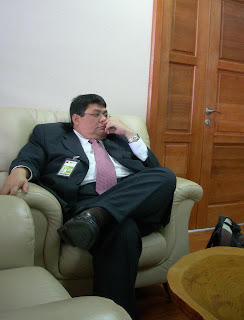 We were at the Chief Minister's Office at twenty to three. They occupy the entire floor of the 28th level of Komtar. The State Cabinet office and operations room is here also. We had an appointment with YB Jeff Ooi, who is the Chief of Staff at the Penang CEO's office. He is also the MP for Jelutong. We were early so we had to wait for a while as he was out of the office for official business.
Right: Waiting outside the Chief Minister's Office 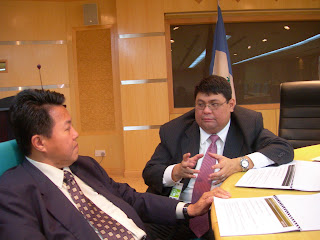 We did a presentation to Jeff, as we tried to get his views and input on the implementation of Penang being a cashless state.

Left: YB Jeff Ooi listening on the concept of cashless community, via our 'shotgun' approach

He was very attentive to the presentation. Infact, he was very inquisitive and perfectly understood where we were coming from and saw the potential and benefits for Penang, be it the state and rakyat. 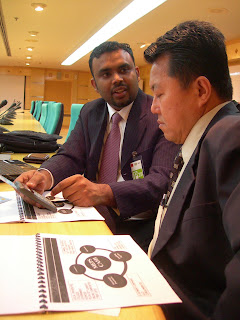 Right: Ken demonstrating the Xiring mobile terminal, best suited for micro collection and delivery business
Ken even showed him how his own party benefited from our payment gateway, which has been provided to them by a third party acquirer. He shown a lot of interests on the concept as a whole. However, we need to work on what ever being presented further. This means we have to come back a few more times. Personally, I am looking forward to work with a state official who is so into e commerce. 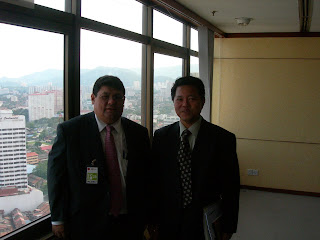 Soon after, we managed to catch up on each other's personal views of current political situation. Before we left, Jeff showed us the south side of Georgetown from his office window. We could also see the entire length of the Penang Bridge and the development on the Pulau Jerejak. As he walked us to the lift, we caught up with Chief Minister Dato' Lim Guan Eng.