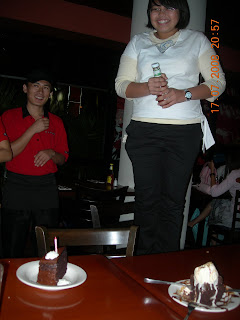 My gem of my life, Girl-Girl is twelve today.

I brought her and momma to a dinner treat at the local TGIF, in One Utama. Of course, being the birthday girl, almost the entire servers came to sing and wish her, for her most important day this year. They made her stand on her chair and insist that she gives a speech.

Right: Making a speech and she wished for her own notebook! 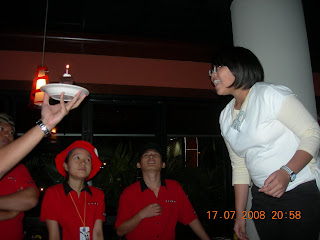 Left: Being made to blow the single candle from three feet away

My missus's co-worker bought her a L'occitane perfume, despite against advice for a gift. Its her first perfume. I still remember exactly twelve years ago, I held her in my arms. The first words I whispered to her ears were prayers call. Today, she is now a twelve old daughter that every father dreamed of. These past twelve years had been the most joyous moments of the both of us. 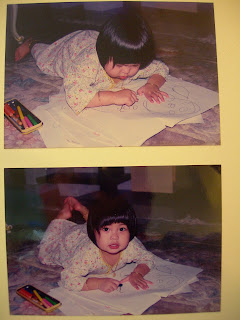 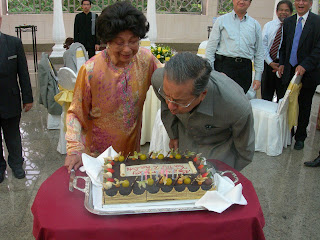 Right: Blowing the candles of the large cake 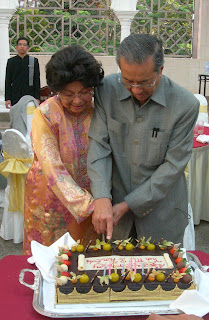 There were sixty people who attended, which include people from the Perdana Leadership Foundation and his private office and staff. The party started at 5.00pm. 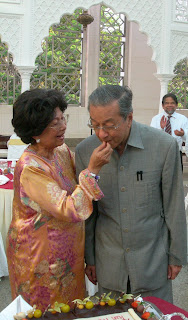 Friends were invited too. Close personal friends like Tan Sri Sanusi Junid and wife were present. There was a sumptous buffet served. Top on the list is Mee Rebus Tulang Kambing. Again, this party's food was a treat.

They prepared a cake for them. So, its customary that the borthday boy and girl is asked to cut the cake, whilst the guests sing.

After the cake was cut, guests asked them to feed each other a small piece, just like wedding couples do it at their reception. And they were sporting enough to show affection in that fashion. 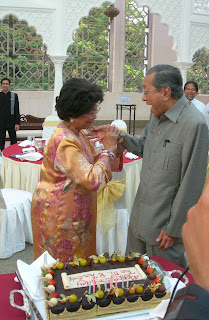 Left: Teasing Tun Dr. Siti Hasmah while she firmly held his hand to get her piece

It was a very light moment for all of us. The food was good. The company was good. The party was held at the rooftop courtyard. The 10,000 odd sq. ft. courtyard, which could double up as a multipurpose open space was actually covered with a glass dome. The whole floor has a very distinctive Central Asian Islamic art motive. I think this is the first clear glass dome with Islamic motive in the country. 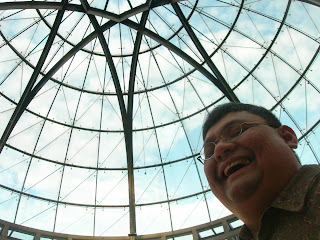 Right: One of Tun Dr. Mahathir's private staff shot this photo of me and the glass dome

I was one of those lucky blokes who were invited to this little private party because I and some friends were at the Yayasan Al Bukhary since 2.45pm. 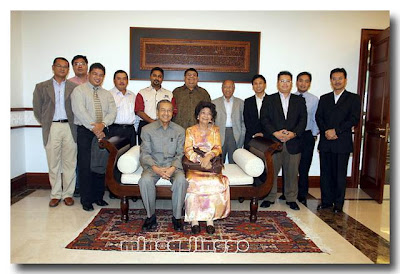 May Allah s.w.t. provide you both with lots of love, happiness and productive minds. InsyaAllah. 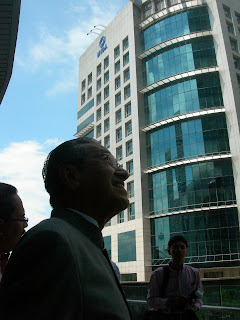 This afternoon, I was invited for a sumptuous fine-dining Kelantanese Malay lunch. It was held at Kelantan Delight, Sooka, Kl Sentral and it was in honour of former Prime Minister Tun Dr. Mahathir Mohamad's 83rd birthday, today. 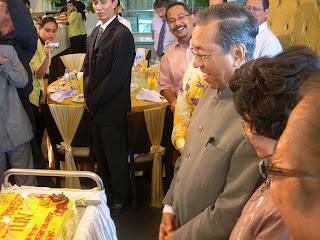 Left: A cream fruit cake was presented to him

As usual, Tun Dr. Mahathir had everyone's awed, but very pleasant response when he arrived. Even though this is a private social function. He was very light and joked with the guests, as her toured the 4300 sq. ft. restaurant. Juhaidee Ean, the owner (who is also my friend), took him to the verandah where he enjoyed the sky line of KL Sentral business district. Personally, I can't imagine ten years ago this was the KTM train yard. 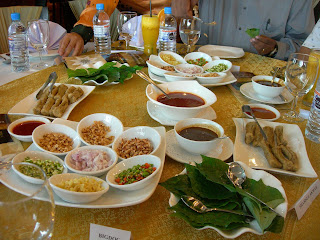 I could not imagine the food that was served to us. It is fit for a Malay Sultan. It started with keropok lekor and kaduk with condiments. It was indeed a new experience for me, eating raw bettle nut look alike leaf with peanuts, fresh onions, dried shrimps (I conveniently skipped the chilly) and with a thick peanut-petis sauce.

Then it was this awesome tomyam soup, served in young coconuts. Apparently, according to Juhaidee (who sat at our table), the coconut is roasted till the juice reached a boiling point. Then the flesh is skimmed out and with the juice, cooked in a tomyam broth, with sweet fresh prawns and the usual condiments like mushrooms, shallots, thyme, lime, ginger and other herbs and spices. Then the boiling hot broth is poured back into the shell and served. The full flavour of the young coconut is preserved, when served.

Of course, Tun Dr. Mahathir is required to say something. Especially after so many, spoke in his honour. He joked about not remembering his brithday this morning and how Tun Dr. Siti Hasmah always reminded him of his birthday, because conveniently, she celebrates hers two days later. Both of them looked in a lot of delight, at the party. 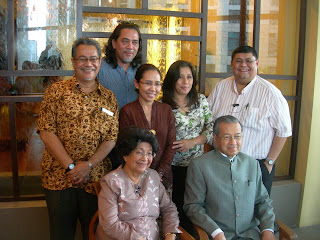 It would not be a birthday party, without photo shots. So, even small time bloggers like me, had the opportunity to capture the moment.

A year after the surgery that changed my life

Today, is exactly a year after I did my bariatic surgery, at Damansara Sepcialist Hospital. I was a morbidly obese chap when in April last year, my cardiologist, who is a personal friend Dr. Mohd. Yusof Sulaiman out it bluntly to me and immediately, I was convinced to under go for the surgery.
Then all the test was carried out and I was prepped for the surgery. I was admitted on 30 June 2007, 4 days earlier so that the doctors could monitor all my vital statistics for the Roux-En-Y gastric by-pass surgery. Surgeon Dato' Dr. Haron Ahmad will perform the surgery, assisted by his instructor Dr. Paul Wizman, a Monteral native living in Miami. At this point, I tipped the scale in the excess of 210 kg! 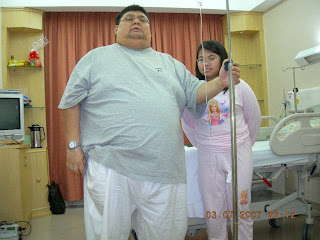 My fellow obese friend Lars Olsen, a Danish living in Taman Tun Dr. Ismail, had his first surgery in the week. The surgery took 5 1/2 hours. Immediately after the surgery, Dato' Dr. Haron and Dr. Wizman came to see me. I raised the question on whether I could last that long on the OT table, under general anaestethic. That got the surgeons thinking.

Right: The night before surgery. I was already on a four day food free regime then 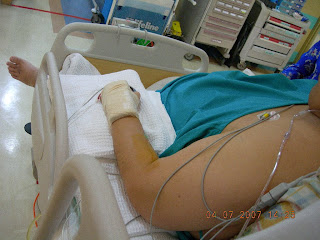 I raised the same question to Dr. Daud and my respritologist and chest physician Dr. Zainuddin Md. Zin. Then the anaestethist Dato' Dr. Wan Nik also visited me.

Left: First photo post surgery in ICU. Note the anesthetist got me on an incline, to help me breathe better

Then the fateful Wednesday morning came. I was wheeled out of my room at 800 am to the OT. 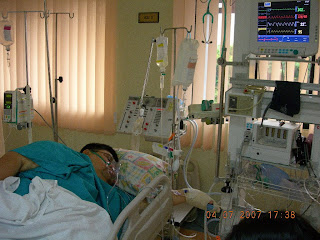 After the prepatory work, I remembered being comforted by Dr. Ibtisam Ibrahim, who was assisting Dato' Dr. Wan Nik, as I was being strapped on the OT table. The reason that I was strapped is because the OT table will be mechanically raised so that the surgery could be carried out at a 75% incline. 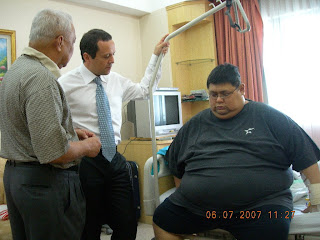 Then by 1100am, its all over. I was wheeled out to the ICU for recovery and observation. The surgery was carried out by Dr. Wizman, who had the extensive experience, and he took just under two hours to do the job.

Left: With Dr. Wizman and Abah. Note, I actually grew fatter because of the water retention around the torso area

It was a slow process of recovery for me. First it was the great discomfort of post anesthesia. I developed complications post surgery as my system was retaining water, and unlike other patients, I actually put on more weight (because of the water retention). 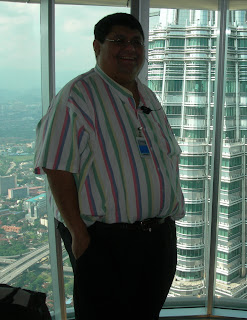 Meeting a sister of an old friend

I was introduced to this lady, Aznifah Ghani, who is a career diplo 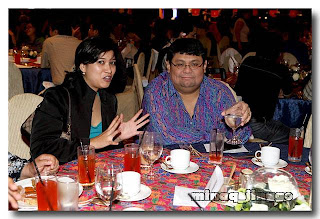 mat with a Malaysian mission in Europe. So we had a chat and it went on a little while longer, post party. Suddenly, it just hit me!

She is the younger sister of my long lost sixth form buddy!

It was a very pleasant surprise, indeed. I shall call my old buddy, Jack, tomorrow and surprise him. Last I heard of him, was over ten years ago. He was still a Captain in His Majesty's army.
Posted by Zakhir's Zoo at 03:17 1 comment: