Celebrating the coming of Hijrah year in Masjid Sultan 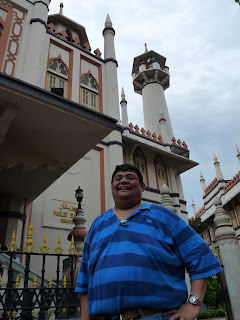 Right: Outside the east entrance of the Mosque 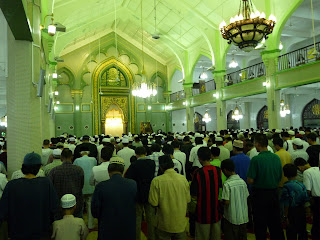 (By the way, the Muslim calculate the dawn of a new day from when the sunset).

Left: At the beginning of the Maghrib prayers 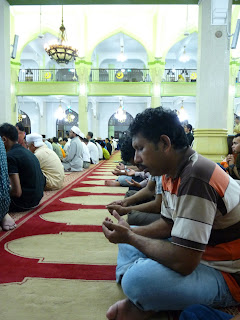 I was lucky to have celebrated this moment, at the infamous Masjid Sultan, North Bridge Rd., Singapore. It is by farthe most iconic symbol of Islam presence and practices in Singapore.

The number of worshipers gathered in the mosque for this special doa recital actually surprised me. The congregation was like a mini Jumaat prayers.

It was a very refreshing experience indeed. 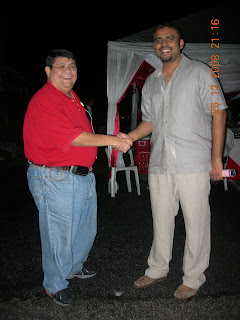 Tonight, I was invited for a Christmas dinner. My colleague, Kenneth Karnan, was kind enough to extend the invitation for the holiest day in the year for Christians. 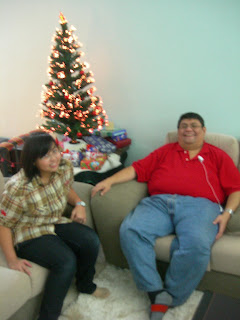 So, at 800pm I and Girl-Girl had a short drive to Kepong Baru. To our suprise, it was a grand do for Ken's family. They actually closed the road to accommodate the dinner party, which was held under two tents on the street.

Left: As usual, Ken would shake the camera!

The buffet spread was sumptuous and the beverages offered 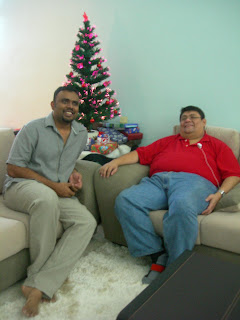 befit a night of celebrations and joyous occasion. From the looks of it, they were expecting a lot of company.

Right: I and Ken in the living room
Anyway, we were thankful and glad we were invited and attended the dinner. 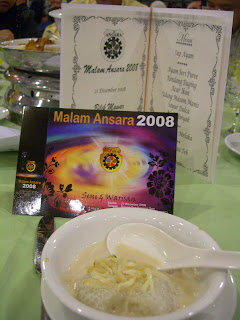 We had our annual Ex-MRSM Alumni (ANSARA) Dinner last night. It was held at Mawar Room, PWTC. The dinner was in commemoration of the year end. Also, ANSARA needed to raise some funds. So, tables and tickets were sold to ex-MRSMers.

Right: The ticket and menu, over a bowl of sago gula Melaka.

It was the same time as last year. I missed last year's, where Astronaut Dr. Sheikh Muzaffar, an Ex-Muo, was the guest of honour. My father had his CABG surgery during that time. 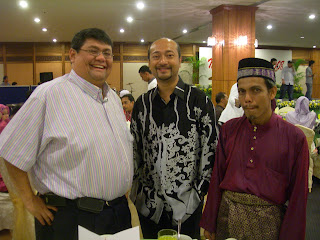 There was an array of attendance to the dinner. The guest of honour is MARA Chairman Dato' Seri Idris Jusoh.

Of course, ANSARA President YB Dato' Mukhriz Mahathir was there, to address the audience. He reminded members to take ANSARA to a new level. During dinner, he made time to go round the tables to socialise and catch up on chit-chats and small talks. 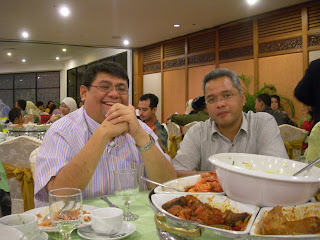 Its nice to see old friends, in such a warm and social environment. Of course, there were reminesences. It would be ashamed for guys and gals who bonded for years, did nostalgically 'relive' the best of thier formative years. It is surreal that the memories live on, eternally in our hearts.

Right: Me and Azha "Gell" Jalil 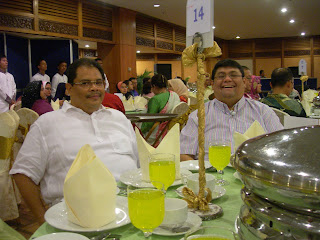 During dinner, an R & B group called "Infinite", which comprise some ex-MRSMers entertained the audience with their songs.

Left: Bhadharul Bahrain and I

A working trip to Penang, again 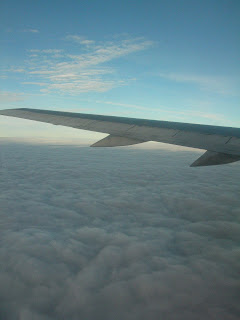 Today started very early in the morning. I was up by 500am to catch the 730am flight to Penang from KLIA. Considering I slept at 200am this morning and it was a full day of Hari Raya Aidil Adha yesterday, getting up was near impossible. Never the less, Kenneth gave me a wake up call at 500am, to ensure I was up.

Right: Over the Malacca Straits, somewhere near Pangkor. Notice the thick clouds
Flying at daybreak is always exicting. One get to see the sun come up, from the altitude of 27,000 feet. We arrived at 830am and after a hearty breakfast, we took an airport cab to Komtar, where the nerve of the Penang State Government. 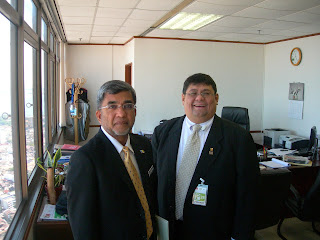 We had a quiet chat with a Special Function Officer in the Chief Minister's Office, mainly on the Penang economy and the affect from the global financial melt down and thus Penang's export, especially to the US and Western Europe.

Left: On the 53rd floor office 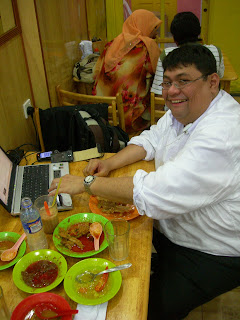 Then we presented the concept of cashless Penang society and the implementation of electronic payment system to one of the Excos.

Right: Lunch at Hameediyah, whilst surfing
Of course, a trip to Penang would not be complete withour nasi kandar. We had ours in Hameediyah, on Lebuh Campbell. Like always, it was something to remember.
Posted by Zakhir's Zoo at 21:58 35 comments: 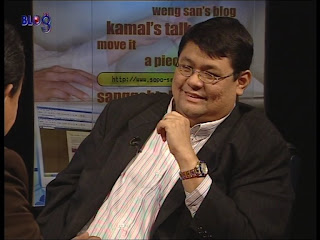 Tonight, I was a guest on the RTM 1 post prime news program, Blog. I was asked by producer, Hasshim Abu Hanifah to speak on political and current issues, from the context of "Korban", since tomorrow is Hari Raya Aidil Adha or Korban. 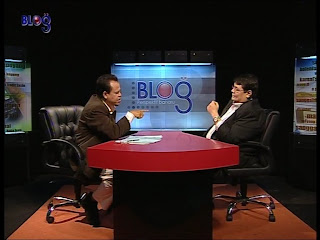 I was notified for this on Friday, which does not give me so much time to prepare. Moreover, I was not given neither the script nor any of questions before hand. 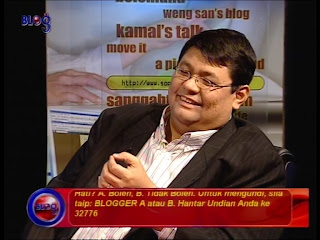 It was a new experience, as RTM is the official Government electronic propaganda machinery. I must say, it felt honoured to be able to talk about having a single school system and doing away all vernacular schools.

It was indeed a very interesting experience.
Posted by Zakhir's Zoo at 03:18 24 comments: